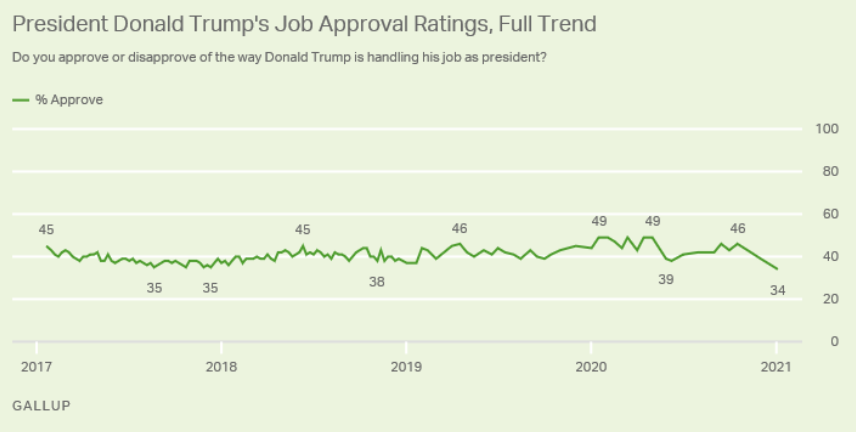 Gallup, the pioneer of modern political polling, has produced its final approval ratings on Trump which have him ending his term on a record low for any President. His 41% average approval rating throughout his presidency is 4% lower than for any of his predecessors.

Trump is the only president not to register a 50% job approval rating at any point in his presidency since Gallup began measuring presidential job approval in 1938. Likewise, he is the only president who did not have a honeymoon period of above-average ratings upon taking office. His initial 45% job approval rating proved to be his high point for his first year as president..Though many presidents left office with weak job approval ratings, Trump is the second, along with Richard Nixon, to register his personal low rating in the final measurement of his presidency. Nixon resigned his office amid the Watergate scandal..Trump’s 7% rating among Democrats is by a significant margin the lowest for a president among supporters of the opposition party. Obama’s 13% average approval among Republicans was the prior low. All other presidents before Obama had at least a 20% average rating among opposition party supporters, with Dwight Eisenhower, Kennedy, Lyndon Johnson and George H.W. Bush all above 40%.

These figures reflect the huge schism that has existed in US politics since Trump’s victory over Clinton with far fewer votes in 2016.

He has been an enormously polarising figure with the true believers ready to do almost anything for their man as we saw at the Capitol building on January 6th.

The challenge for the Republicans is that he is not going away following Biden’s inauguration tomorrow at 1700 GMT.

In the betting he is currently favourite to secure the party’s 2024 nomination.