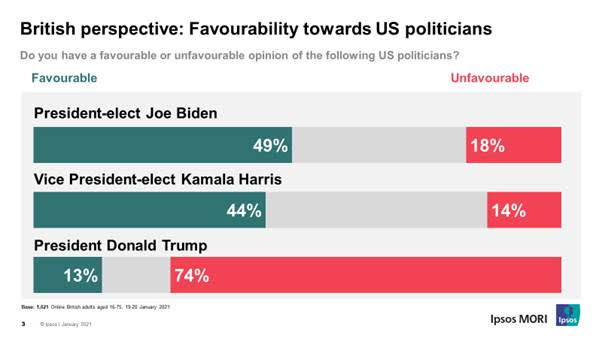 The numbers are in sharp contrast to views of Trump

In a new survey by Ipsos MORI, half of Britons (49%) are favourable towards the incoming President of the United States, Joe Biden, only 18% view him negatively. A similar proportion (47%) expect the USA to use its influence around the world mostly for good over the next four years under Biden’s presidency.

The outgoing President, Donald Trump is not seen so positively. Perhaps unsurprising given the events of the last few weeks, three-quarters (74%) of Britons have an unfavourable view of Mr Trump while only 13% see him positively. Half of Britons believe the US has used its influence around the world mostly for bad over the past four years (48%).

Former PBer now Research Director at Ipsos MORI, Keiran Pedley, said: “These numbers show that the British public is more positive about the prospect of a Biden presidency than it was about the reality of a Trump one.  Biden’s net favourability with Britons stands at +31 compared to Trump’s -61. Meanwhile, whilst 48% of Britons felt the US used its influence mostly for bad under Trump, just 10% expect the same for a Biden presidency; with 47% expecting the US to use its influence mostly for good”.