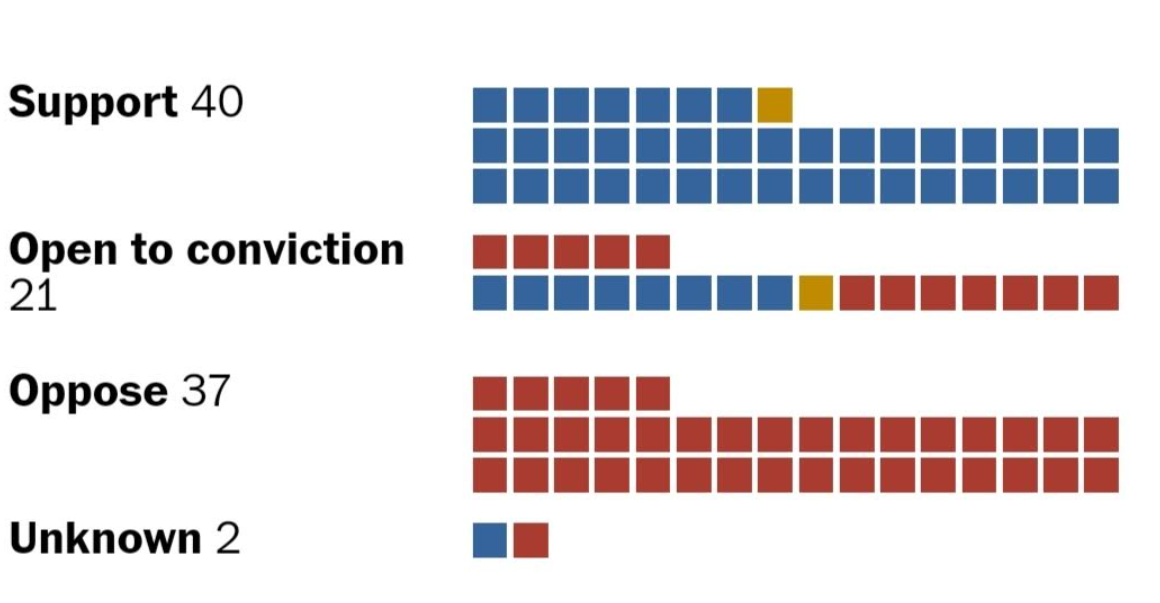 My guess is that we will be checking back to this graphic in the Washington Post a fair bit in the next few days as the process to impeach former President Trump starts in the US Capitol building – the scene of the Trump inspired riot just 34 days ago that left five people dead. Each red block in the chart represents the view of a GOP Senator with yellow indicating position unknown. The Blue blocks are Democrats.

At the moment this is less clear cut than Trump’s first impeachment trial in the Senate when the then majority leader, Mitch McConnell, did everything in his power to down play the event. Quite a few Republican Senators have indicated in some form that they could vote to convict but not enough to reach the required two thirds majority.

This time the person downplaying the event is Trump’s successor, Joe Biden, who is going out of his way to give the impression that he is not particularly interested. This is from Politico:

Washington may be consumed by Donald Trump’s impeachment trial this week, but the White House has a decidedly different view of it: Impeachment? What impeachment?. The Biden team has shut down question after question about where Biden stands on this week’s trial, even with its massive historical, constitutional and political ramifications. On Monday, press secretary Jen Psaki wouldn’t even say whether the president would receive daily updates on the trial’s progress. It’s a remarkable bit of messaging discipline driven by a simple political calculation. Biden’s presidency rests on whether he can drive down Covid numbers, reopen the economy and get kids back in schools. He needs his Covid relief package to do that, not the banishment of his predecessor from future public office.

One thing’s for sure is that how each of the 50 Republican senators votes will be noted and remembered and could hold the key to whether they get selected again to represent the party and be elected. This will likely be the main reason why individual Senators are reluctant to condemn Trump who is said to still have substantial grass roots backing amongst the party supporter base.

Punters on Smarkets make it a 97% chance that Trump won’t be convicted.