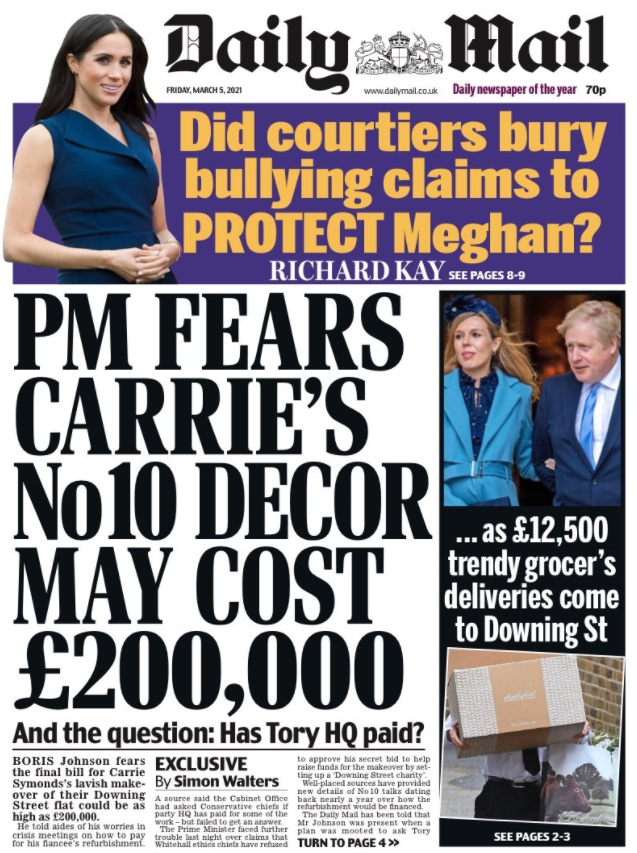 The big polling story of the year is YouGov in the Times reporting a post-budget lead of 13% for the Tories which is greater than the 11.8% vote margin that Johnson’s party achieved at GE2019. But it will be the Daily Mail front page that will most worry Downing Street. The paper’s Simon Walter reports:

Boris Johnson fears the final bill for Carrie Symonds‘s lavish makeover of their Downing Street flat could be as high as £200,000. He told aides of his worries in crisis meetings on how to pay for his fiancee’s refurbishment.  A source said the Cabinet Office had asked Conservative chiefs if party HQ has paid for some of the work – but failed to get an answer. The Prime Minister faced further trouble last night over claims that Whitehall ethics chiefs have refused to approve his secret bid to help raise funds for the makeover by setting up a ‘Downing Street charity’. The Daily Mail has been told that Mr Johnson was present when a plan was mooted to ask Tory donors – including environment minister Lord [Zac] Goldsmith, a close friend of Miss Symonds, and billionaire JCB construction boss Lord Bamford – to contribute. It is not known whether either man has provided funds. his newspaper has been told of concern among some senior Tory figures over whether it was ‘appropriate’ for party funds to be used ‘in effect, to subsidise the Prime Minister and his partner’s lifestyle’.

The problem here is that this is a story a bit like the Cummings trip to Barnard Castle that looks very bad in the public eye and will be remembered. As they say the “optics” aren’t good. This is particularly so at a time like the present when so many people have had to live with big reductions in their incomes because of the pandemic.

It should also be a worry that it is the Daily Mail which has the story because this is probably the most read paper amongst those who voted for the Tories at the last election. When that paper gets stuck in it tends to keep at it and you can see further revelations coming out.

One factor about Boris is that he took a huge pay cut but when he returned to the Commons and was made a minister. It is this more than anything which could see him move back to journalism.