Back in 2004 when this site was only a few months old we had the first PB Westminster by-election which happened to be at Hartlepool on Teesside. It turned out to be quite a big betting event with LAB holding off against a stiff challenge from the LDs.

Now, as Ladbrokes have it, the Tories are strong odds on favourite to take the seat which would be a remarkable achievement for a party in government. For since 1945 the WW2 the government has only gained a seat at a by-election from the main opposition party four times. These were Copeland in 2017, Mitcham & Morden in 1982 just after the Falklands War, – Brighouse & Spen in 1960 Sunderland South in 1953.

My guess is that the odds are the way they are because Labour is not perceived to be doing well at the moment. This is the result from GE2019. 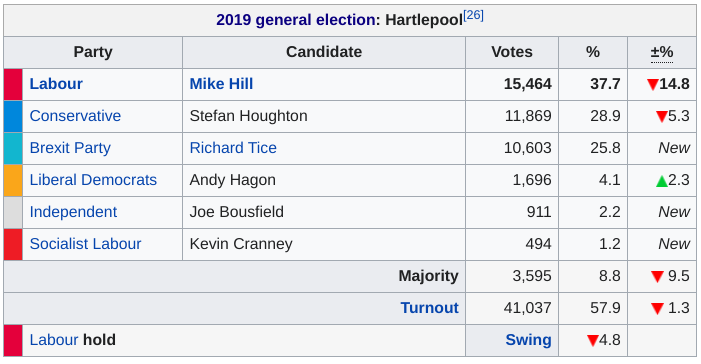 Certainly this was a very strong LEAVE constituency and the Brexit party’s Richard Tice had what was just about the best result for the party anywhere in the country.

But will all the Brexit party’s vote got to the Tories as seems to be the assumption. I am not so sure because I think the country has moved on from Brexit now and is nothing like the political issue that it was. Also Labour is a lot less toxic now as a brand than it was when Corbyn was leading it at the general election.

This significant swing to Labour from the Conservatives since the last general election is not always apparent and the current Tory polling position is very much down to the success of the vaccine programme. It is far from certain that that will continue to be as big a positive.