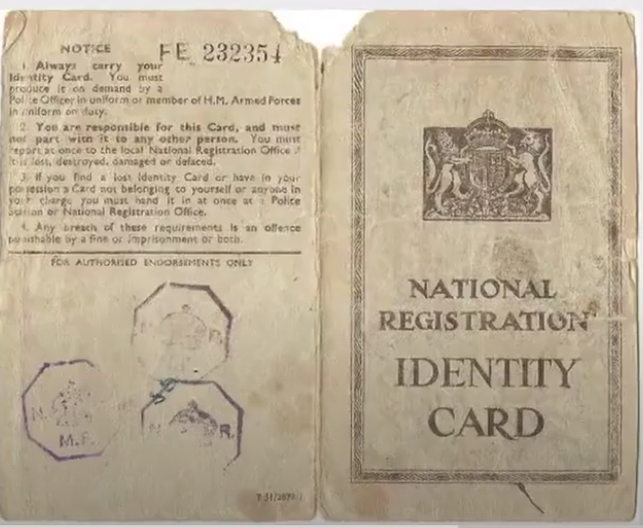 The case of Willcock v Muckle should be much better known than it is. In 1950 Mr Willcock, stopped by a policeman for speeding, was asked for his ID card. He refused. The case went to the Court of Appeal where the Lord Chief Justice, Lord Goddard, known for his ultra-conservative views, thundered against the idea that the police should be able routinely to demand ID cards for irrelevant reasons. In 1952, 7 years after the end of the war which had necessitated their introduction, they were finally abolished.

That was the end of a most unBritish idea, necessitated only by the need to defeat the sorts of horrible countries which thought citizens should answer to the state for their movements. Even when introduced in 1939 some MPs had qualms:

“One thing that we do respect in this country is our freedom from being challenged on every occasion to produce something to prove that we are certain persons.“

Still, the “Man in Whitehall knows best” virus lies dormant in politicians, policemen and civil servants, proof perhaps that those who seek power are those least to be trusted with it. Various attempts have been made since to reintroduce them. A debate in Parliament in 1989; a consultation paper in 1995 under Major. Michael Howard was in favour. Blair tried the hardest and got closest. Many reasons have been given for their need: terrorism, illegal migration, even pornography. (Remember May’s licence to watch it, mercifully interrupted?) Now vaccination passports. Not ID cards you say? Well, if you have to prove you’ve had a vaccination you are also going to have to prove who “you” are. So yes – an ID card, even if in embryo. If you have to produce or demand them in order to avoid the state fining you or someone else, then they are de facto (and pretty soon thereafter de jure) mandatory, no matter how much “This Will Make You Free” lipstick is applied to this pig of an idea.

A few useful lessons can be drawn from Britain’s previous use of them and other temporary emergency powers:-

Despite the war being long over, neither main party took any steps to remove them until challenged. It took a full 7 years before they went. Describing something as temporary is a sly, dishonest way of getting people to agree to something they would refuse if they were told from the start it would be permanent.

Linking it to a crisis is even better because who knows when it ends. Or rather, the definition of what is a crisis is entirely in the government’s gift. See how the Covid emergency powers have been extended, how the crisis is no longer the virus’s exponential spread overwhelming hospitals but simply its mere existence and possible mutations. The latter is not a crisis, simply a statement of biological fact, transformed into a justification for enduring restrictions. How quickly and conveniently the government forgets it is no longer aiming for zero Covid.

A power given for one purpose will inevitably be used for another. See the misuse of various anti-terrorism laws. Or the laws will simply be misunderstood – for instance, the police’s repeated misuse of CV restrictions – so much so that all of the prosecutions under it had to be dropped by the CPS, so badly had the police, whether deliberately or not, misunderstood the law. What this does for the relationship between citizens and authority figures (even those private businesses forced to become them against their wishes) seems not to bother Ministers. LCJ Goddard was right when he said that such behaviour made people resentful and “inclines them to obstruct the police instead of to assist them.”

Once in place for one purpose, why not another, then another until, step by step, there is little left which can be done without the need for what was initially said to be limited. This was the reason for the Attlee government’s refusal to abolish them: they were useful for the NHS and family allowances. If useful for a vaccine against disease X, why not disease A, B and C? If everything is controlled, monitored, watched and recorded, undoubtedly a lot of behaviour which some might dislike can be limited or eliminated. But the trade off between these apparent benefits and the loss of liberties is not debated. (The benefits are illusory anyway – those societies most controlled by the authorities are usually the ones in which the most appalling things are done to citizens by their government.) The government has seamlessly moved from imposing restrictions as an exceptional measure to be lifted as soon as named conditions are met to an assumption that restrictions of one kind or another are normality, the only question being what types of restrictions.

Protest then? Possibly but only if the police allow and only if you have no impact on anyone at all. Probably best to take your silent protest home and do it there where no-one, let alone a politician, can hear you.

It is so much easier for authorities to take action against citizens for breaking an administrative rule than prosecuting a substantive crime. Mr Willcock was prosecuted for not showing his ID card not his speeding. The Covid regulations made it an offence not to comply with a police instruction even if you had a reasonable excuse for being outside your home. ID cards – if they are to be effective – will necessarily end up making pretty much everyone a lawbreaker for some inadvertent infraction. Hard to think of a way more guaranteed to undermine the very idea of the rule of law. It will give the authorities the opportunity to annoy, harass (or worse) their least favoured groups. Only the naïve think this opportunity won’t be taken advantage of.

There have been changes since 1953 of course. But all of them make ID cards in any form much more intrusive and dangerous for the citizen. See here for examples.

The fundamental reason why they are wrong in a society claiming to be free is this. They fundamentally change and invert the proper relationship between citizen and state. They make citizens answerable to the state rather than the other way around, people to be tracked and controlled. They make our liberties, our freedom to live our lives how we want dependant on the state’s convenience, which imposes restrictions then disingenuously seeks to present ID cards as the solution to the very problem the state has created. Their intrusive nature poison the relationship between citizen and state officials: less public servants, more our bosses, hectoring us, interfering with our daily lives, telling us what spaces we can go to and under what conditions, deciding for us what is or is not essential. Their message is that our freedom is a privilege to be bestowed, a reward for compliance. Not our right.

It was a Conservative government which won the 1950 and 1951 elections with the slogan “Set the people free”. Now we are governed by a party which waves British flags, hectors others for not doing so and sings about Britons never being slaves while curtailing their liberties. If only we also had an opposition, capable of governing, and proudly and unashamedly serious about setting us free.