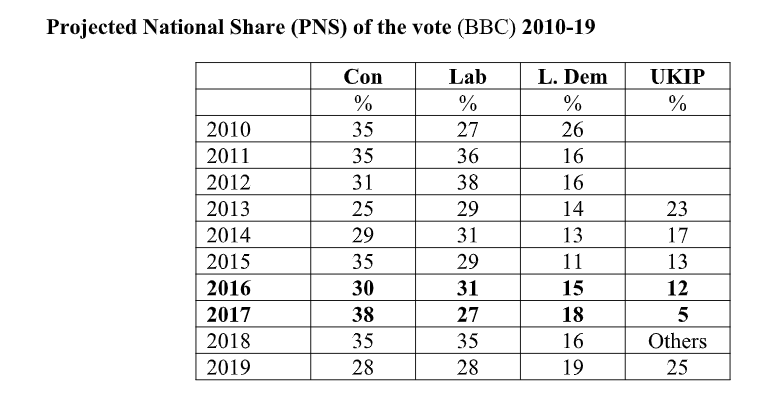 This time, surely, the Tories look set to exceed 38%

This year’s elections cover those seats last voted on in both 2016 and 2017 because, of course, last year’s elections were postponed because of COVID and so will be substantially larger than usual.

It is quite difficult devising betting markets for the locals but this year the innovative Smarkets has been creative and is now taking exchange bets on the BBC’s Projected National Shares. These are the market rules:

One of the challenges looking at the locals is making comparisons between different years for over a four year cycle different sets of council seats are at stake. In order to get round this the BBC team, usually headed by Prof John Curtice, produce what are termed Projected National Shares based on the results in selected wards.

The last time there were English local elections was in May 2019 elections which took place during dark days for the Tories. It will be recalled, TMay was still PM without a majority and was having a terrible time losing the Commons vote after Commons vote in her efforts to get a Brexit deal agreed by MPs.

This year things could not be more different for the party. Brexit is now settled and Johnson is reaping the political rewards for what is widely acknowledged to be a hugely successful COVID vaccination programme. On top of that UKIP or its successor Brexit party is no longer there and Farage is struggling to get his latest political venture established.