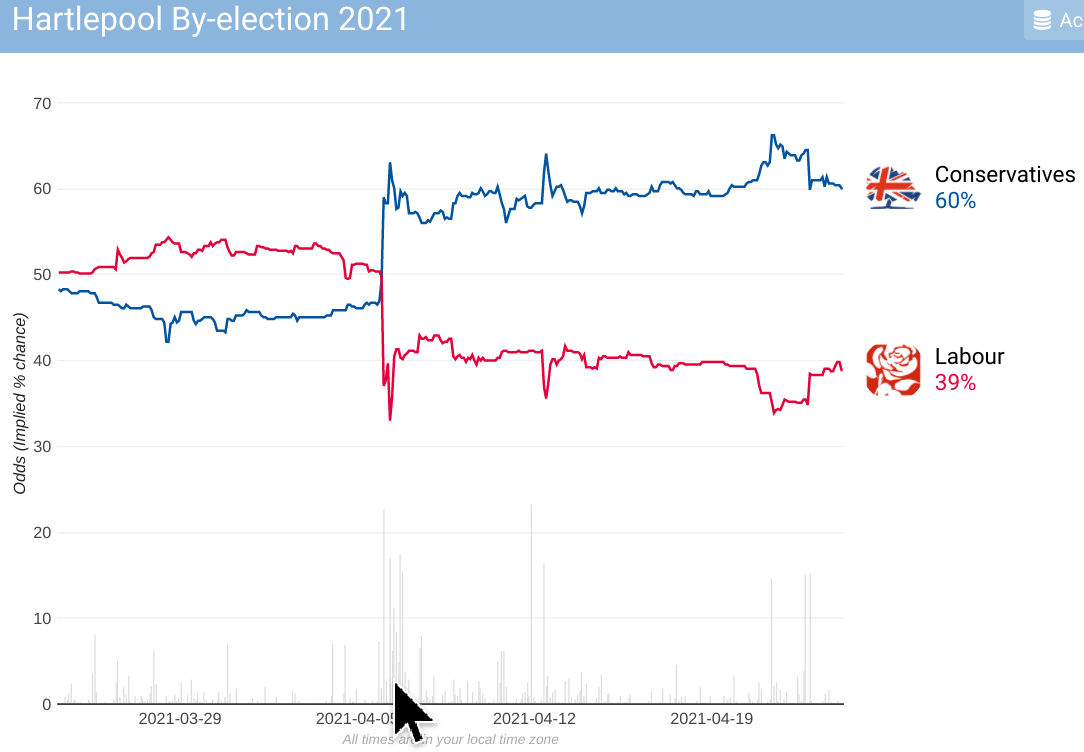 Boris Johnson and Keir Starmer were both campaigning in Hartlepool yesterday. That may be because they both believe the by-election there to be very close or it may be that they wish to give that impression.

It really shouldn’t be close. Governments hardly ever gain by-elections from the main opposition and when they do, there are usually exceptional circumstances. Tony Blair, despite his extraordinary poll leads through most of the first five years of his government, never managed it.

In fact, only twice in the last 60 years have governments made a by-election gain: Mitcham & Morden in 1982, and Copeland in 2017. In the former, the incumbent MP defected to the SDP and split the anti-Tory vote – and the election was also held towards the conclusion of the Falklands War, and Labour was defending a majority of under a thousand; in the latter, the Tory government had a huge polling lead and the local conditions were also unpropitious for a Labour party led by a nuclear-sceptic.

Against which, while the Tories do currently have a comfortable polling lead of about 7-10%, that’s fractionally less than their lead at the last general election, and Labour is defending a majority of nearly 9%; all else being equal, the swing should be to Labour – especially when the incentives for people to turn out to kick the government are much greater than the incentive to turn out to grudgingly support it as the least-worst option – and even if it’s not, it’s hardly a knife-edge marginal.

But not all is equal. Crucially, the question is where does the 25.8% that the Brexit Party won in Hartlepool in 2019 go? There’ve been two polls conducted in the constituency since Mike Hill resigned: one, a few days later, putting Labour 3% ahead; a second, a fortnight later, giving the Tories a 7% advantage. That second poll, the national Tory lead, and the size of the 2019 Brexit party vote are the reasons why the Tories are favourites to take the seat.

That poll is three weeks old now. Three weeks in which the campaign there has been underway, as have those for other elections, and in which the influence of day-to-day events will have been felt. Even if it was right then (and the two polls diverged considerably), is it still right now?

This is a market I’m very much in two minds about. Logically, I see the case for the Tories winning (and such snippets as I’ve heard from the constituency suggest they are very much in with a shout), but it just runs counter to so much electoral history.

Hartlepool might well have been part of the fallen Red Wall in 2019 but for the Brexit Party’s intervention. We certainly cannot read directly across from the BxP vote to the Tories but with over ten thousand Brexit Party voters and a majority of less than 3600, they’d have needed about a two-to-one split (and no abstentions). In a Brexit election, that could have been done.

That was then. Brexit doesn’t need to be ‘done’ now, nor Corbyn kept out. On that basis, the 13/8 available for Labour (Betfred) feels better value than the Tories’ 4/7 (various bookies).

The betting chart of the Betfair market above is from Betdata.io