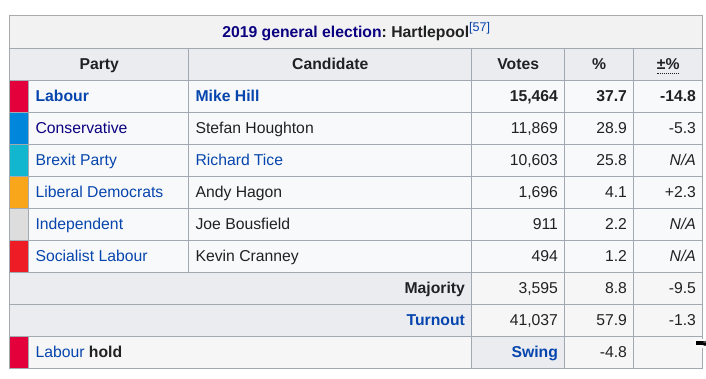 There’s a good by James Johnson in the Times on why the likely CON victory tonight in Hartlepool won’t be as dramatic as it sounds. He argues:

…the constituency has a uniquely large Brexit Party vote from 2019. Looking just at seats where the Conservatives were in second place, this was the largest in the country — and the third-largest overall. It is one of only five of 650 seats where the Brexit Party share was above 20 per cent. …That exceptionally high Brexit Party vote means that we cannot say much about the rest of the Red Wall from any Hartlepool result, especially the seats won by the Conservatives last time. Only 7 per cent of the seats won by the Tories in the north and the midlands have the Brexit Party on more than 10 per cent of the vote...We already know what Hartlepool can tell us. That there is a realignment in our politics. That Boris Johnson is popular. That Labour is seen as out of touch by many of its former working-class supporters. A Tory win would not be a political earthquake, but a seat playing catch-up with what already happened in 2019.

Hopefully the count will be completed relatively quickly and we’ll be able to get some sleep.