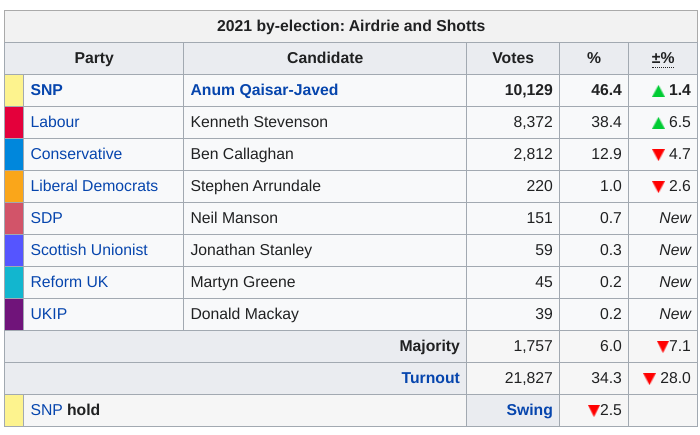 Should this go down as a LAB miss?

Overnight we have had the result of the Airdrie and Shotts by-election which was held following the resignation of the former SNP MP to run for the same seat at last week’s election for the Scottish parliament.

The general assumption was that this was always going to be an SNP hold and it has attracted little attention. The big interest comes in the actual result in the Wikipedia table above.

As can be seen turnout was sharply down on GE2019 by 28% but the most interesting figure is the LAB share – up 6.5% and only 1,757 votes away from victory. Given the decline of the CON and LD shares it looks as though there has been some marked anti-SNP and pro-Union tactical voting.

Looking over historical by-election results this was the best performance for LAB since the Tooting by-election in Sadiq Khan’s old seat in 2016. I wonder whether if the party had tried harder if it could have achieved a victory.